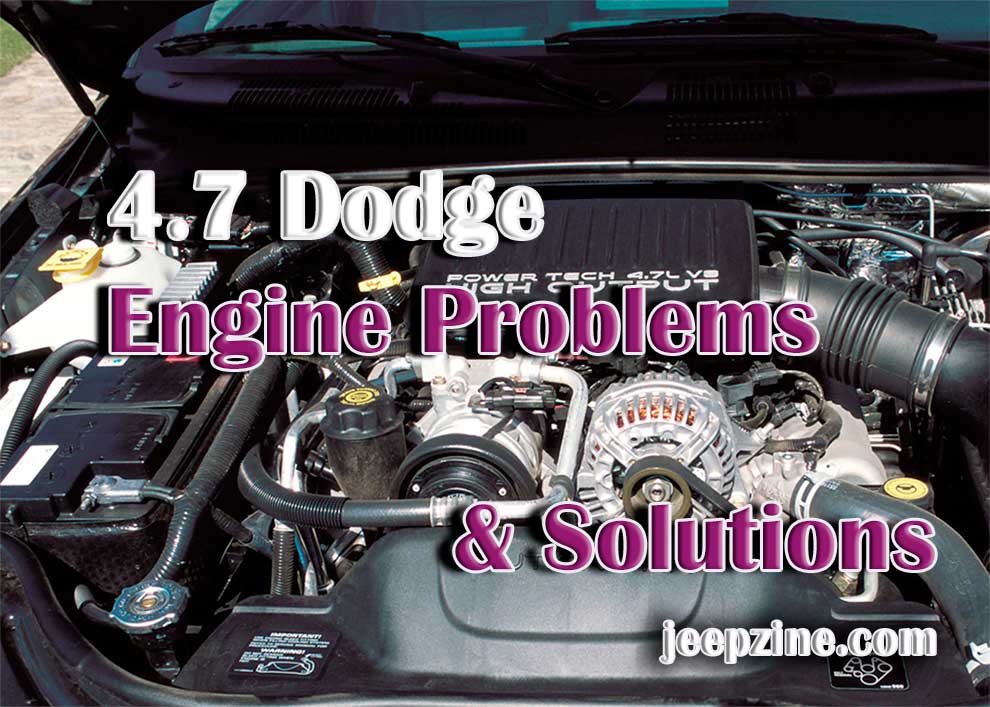 Chrysler is one of the biggest automobile companies on the planet, and it’s got quite an impressive line-up of engines. As for the 4.7-lit Dodge V8, also known as the PowerTech motor, it was first introduced in 1999. It’s a rather powerful, capable, and reliable unit with decent power output (310HP and 330 lb.-ft. of torque). However, like any other gear/equipment, it does have its fair share of flaws and issues.

And that’s exactly what we’re here for today: to talk about the most common problems and solutions. Oil sludge, engine failure, overheating – those are just some of the known problems that you might have to deal with. So, if you’re ready to get your 4.7 Dodge back on its feet, let’s start!

This is the #1 issue that most drivers complain about. If you take good care of your engine and never miss a maintenance day, it will serve you for many years. The average lifespan of the 4.7-lit Dodge is 100K miles, give or take. Mostly, problems with engine failure start when you hit that 70K-mile mark. So, what can you do to avoid this? Well, not much, really.

Some experts recommend changing different components of the motor to try and minimize the expenses (a brand-new engine will cost you a lot). But, in my experience, if the unit is really old, it would be best to think about replacing it completely. If you’re driving an older Dodge truck or SUV, an aftermarket engine won’t cost you a pretty penny.

Also called oil sludge, it’s when the oil inside of the engine gets too thick and prevents the motor from delivering its A-game. And the thicker the oil, the more it clogs everything in the engine compartment. If it’s a really severe case, the car simply won’t start. Constant engine and transmission failure are clear signs that it’s time to check on the oil.

And don’t go cheap with it: buy high-quality oil from a known brand. Ideally, it should be synthetic. Unfortunately, a complete oil change doesn’t always solve the problem. You might have to fix some ventilation issues. I’m talking about the crankcase and/or the PCV, of course. If you’re not up to the task, let a mechanic handle that for you.

Most drivers never have to deal with oil foam, but when you see it, you’ll instantly know that something’s wrong. Basically, it’ll be a lot of foam in the oil, and not on top of it, but at the bottom. What does that mean? Well, you’ve got a lot of air mixed in with the oil, and that’s bad news. Air is one of the worst enemies of the engine. The bubbles of air may be really-really tiny, by the way.

Humidity is another reason for this. My advice to you: make sure the engine is nice and heated up before starting the car. But mostly, it’s the air that’s causing all the havoc; so, let’s see how we can deal with that. As I already mentioned, decent-quality oil fixes a lot of problems with the engine. However, if the air bubbles aren’t going anywhere, that probably means the vacuum seal or the casing is damaged. If that’s the case, pay the closest auto shop a visit.

This next issue is very common in hot and humid areas. Off-roading enthusiasts also complain about overheating, as they constantly push the powertrain to the limit. The #1 cause of an overly-heated engine is the lack of proper air filtration. While the factory system is decent, it’s not perfect. The best solution for this would be to invest in an aftermarket air intake kit.

The intake tube will greatly increase the airflow, while the built-in filter can keep debris and dust away from the engine, making it last longer. Coolant is a less expensive solution. Make sure to run regular maintenance checks. And pay extra attention to the gauges: they’ll be the first ones to report the problem. The engine, in turn, will get “rumbly” – another obvious sign.

Have you ever had to deal with a frustrating ticking sound coming out of the engine? Well, this is a tricky one, as sometimes, it’s nothing serious, while other times, it can indicate a very serious problem. As always, start with a diagnosis. Most likely, the engine is low on lubricant – add some oil, and the sound will (hopefully) go away. If you’re lucky, just running the engine for a minute or two and warming it up might solve the issue.