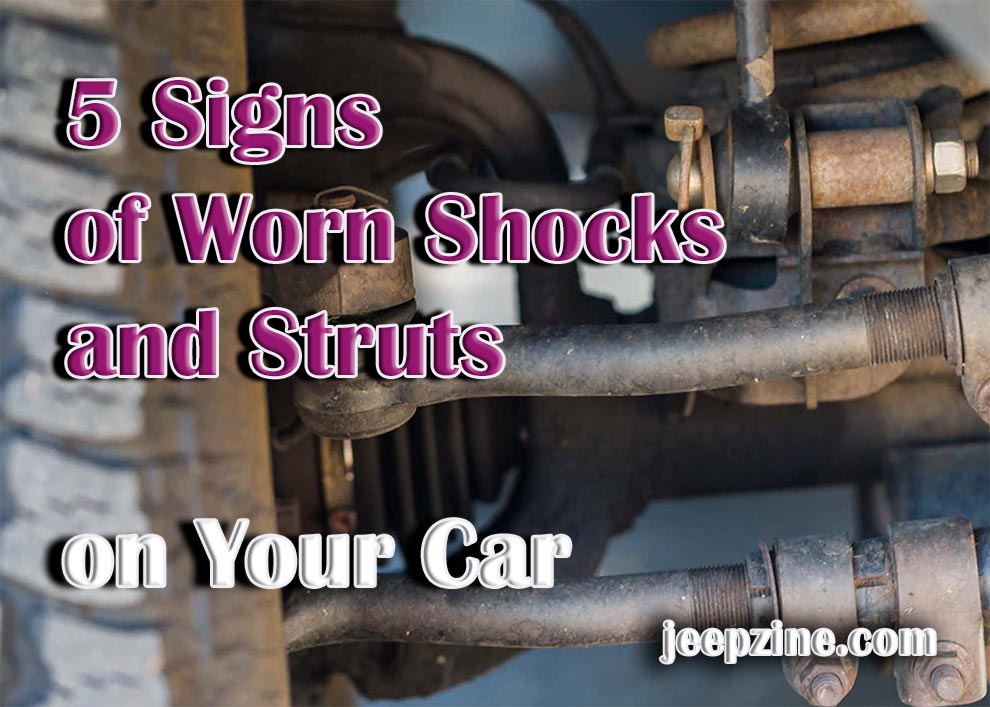 It’s safe to say that without a properly working suspension system, you won’t be doing much driving, no matter how strong the engine is. And, the struts and the shocks are an integral part of the suspension mechanism. So, when they are damaged or worn out, that will have an immediate negative effect on your vehicle’s performance. But how do you recognize the signs?

How do you know for sure that it’s not just another part of the car acting up? Well, that’s why I want you to check out the common symptoms of malfunctioning struts/shocks! We’ll go over each one in detail so that you know what to expect. The good news is – the signs of bad shocks are mostly pretty obvious and you won’t need a mechanical degree to figure them out!

When the driver doesn’t feel like they are in control, a lot of bad things can happen on the road. You’ll feel that the ride quality isn’t as smooth as it used to be, and you’re not making the turns as easily as you did before. The experts use the term “sway” to describe the lack of stability, flexibility, and, again, control over the steering wheel. In most cases, it’s the struts or the shocks to blame.

One of the cheapest and most effective ways to check whether they are, indeed, the root of the problem is to ask a buddy for help. Have them drive the car slowly and keep your eyes on the suspension. If the car is constantly swinging from left to ride or jumping up and down on the tiniest bumps, that means it’s time to change the shocks/struts.

Without a decent set of struts/shocks, the vehicle’s body, wheel assembly, and chassis won’t be able to “handle” bumps smoothly. Now, in addition to, well, a bumpy ride, you’ll also start to hear an annoying clunking sound, almost like someone’s knocking from underneath the car. This is a result of extensive metal-to-metal contact and friction.

Another very common side effect is a vibrating steering wheel. It won’t be “in your face”, but still strong enough to cause frustration. In some cases, this happens because of unbalanced wheels. Now, even if you have the Best shocks in town, I still want you to check on the tires. Uneven tire wear is often the result of worn-out struts or shocks. Pay extra attention to the rear wheels: do you see bald, round marks that look like cups?

I bet you’re driving with a set of faulty shocks! A quick note: struts and shocks aren’t interchangeable, by the way, even though some drivers think they are. So, if you have a couple of bad shocks, you won’t be able to replace them with brand-new struts. The reason: struts are a structural part of the suspension, and there’s no way you can just go ahead and put shocks in their place. Oh, and this works both ways.

Next up, we have arguably the worst side effect of malfunctioning struts or shocks. And, it usually doesn’t happen over time to let you get accustomed to the longer braking. Instead, once the shocks blow out, the braking system instantly becomes a lot less reliable (and much slower). According to third-party research, issues with the suspension system tend to increase the braking distance by 20-30%.

This can also lead to what’s known as “nose-diving”. That’s when you reach a full stop and the car’s front end literally dips a bit. So, what happens if struts are not replaced? When the shocks/struts are faulty, the suspension system loses its dampening abilities and the car’s entire weight rapidly shifts towards the front when you hit the brakes. This is a rather big issue and shouldn’t be taken lightly.

Last, but not least, we’ve got leaks – the most obvious sign of damaged shocks, as you can actually see the fluid dripping from the car. However, if you’re not very careful, you may not even notice this, especially when it’s hot outside and the fluid takes very little time to dry. When the seals wear out of “fall off”, the fluid will start to bleed. This only happens with hydraulic-based shocks, of course.

Leaking shocks can greatly affect overall performance, and not in a good way. Therefore, make a habit of regularly checking on the entire suspension system to detect any leaks that may occur. And while you’re at it, check the brakes as well, because they also tend to leak, especially if you do a lot of off-roading and drive on rocky terrain.