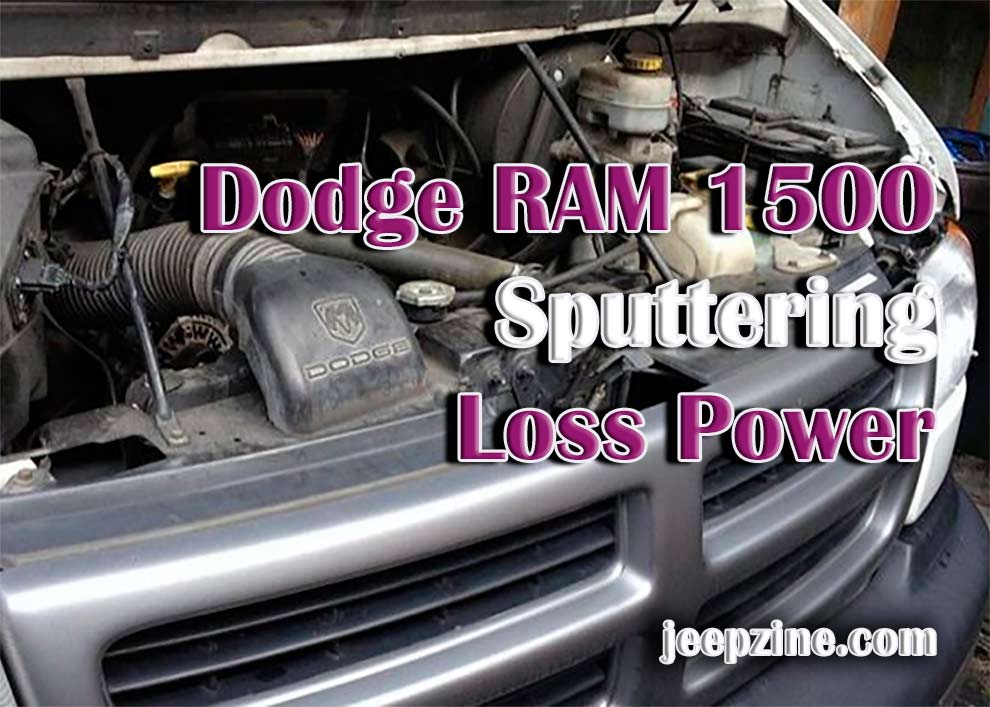 Is your truck’s engine acting up – making hissing, crackling sounds, and doesn’t work the way it should? Chances are, you’re dealing with sputtering. It’s a known problem for the RAM 1500 engine and can be caused by different things. The first thing you should do is check on the fuel. If you’re running low, fill it up, and the problem will (most likely) go away.

But if the engine has more than enough lube and is still sputtering, then we need to dig deeper. I know my way around the RAM trucks and had to deal with this issue more than once. For this guide, I prepared a list of the most common causes of sputtering. Plus, we’ll go over the most effective solutions and learn how to fix the motor.

Like the name suggests, fuel injectors “spray” fuel into the engine (or, rather, the combustion chambers inside the cylinders). Next, it (the fuel) gets mixed with air and the spark plugs ignite it – that’s how combustion happens. Now, if the fuel filters are dirty, they become less effective at injecting. As a result, the chambers don’t get enough fuel, which leads to sputtering and slow acceleration.

The most effective way to handle this is to clean the fuel injectors. The experts recommend cleaning them every 25-30K miles to keep everything in shape. And you won’t even have to remove the injectors to get rid of all the carbon buildup that’s causing the clogging. Right now, injector cleaners are available for 10-15 dollars.

If that didn’t solve it, then I bet your spark plugs are faulty. As mentioned, they are responsible for the ignition. When they wear out, plugs lose their effectiveness and the engine starts to misfire due to a lack of fuel. On average, new spark plugs for Dodge Ram will cost you 40-50 bucks for a pack of eight. The installation will be a bit tricky, though, especially if it’s a V6 or a V8.

So, you might want to let a pro handle this if you’re not 100% up to the task. Cleaning them is also an option, but, statistically, most plugs that cause sputtering aren’t worth keeping around.

#3: Leaks in the Exhaust System

Again, we’re talking about leaks here: if there’s an “opening” in the exhaust system, gases will escape and cause sputtering. The worst thing about this: emissions are incredibly hot, and they may end up melting some plastic components inside of that RAM 1500 truck. Sometimes, they even find their way into the cabin, which can be dangerous for the driver.

Most mechanics will be happy to fix this for you. They use steel putty to patch the converter up (or, you can buy it and apply it yourself). This won’t be a permanent solution, of course.

The exhaust system is full of seals and gaskets. Their #1 task is to block exhaust gases that are trying to get into the combustion chambers. When they fail, sputtering follows. And if you don’t act quickly, the exhaust system will, most likely, get severely damaged, forcing you to buy a new one. Gaskets and seals aren’t at all expensive. So, the second you figure out that they’re the cause of the problem, don’t hesitate to order a new set.

This is another common cause of engine sputtering, especially in the RAM 1500. Basically, what the sensors do is “describe” the exhaust fumes in the combustion chamber to the truck’s computer system. The computer, in turn, controls (or, rather, adjusts) how much fuel enters the engine. As you can imagine, if the sensors are malfunctioning, the engine gets the wrong amount of fuel. You can buy a brand-new sensor for 15-20 dollars.

No matter how reliable and high-quality the hoses in your truck maybe, they will leak over time. Once that happens, the engine will start acting strangely when you hit the gas pedal. Sputtering sounds will also be a part of the deal. In my experience, it’s always better to replace a leaking hose than to try and fix it. Fortunately, they are available for cheap.