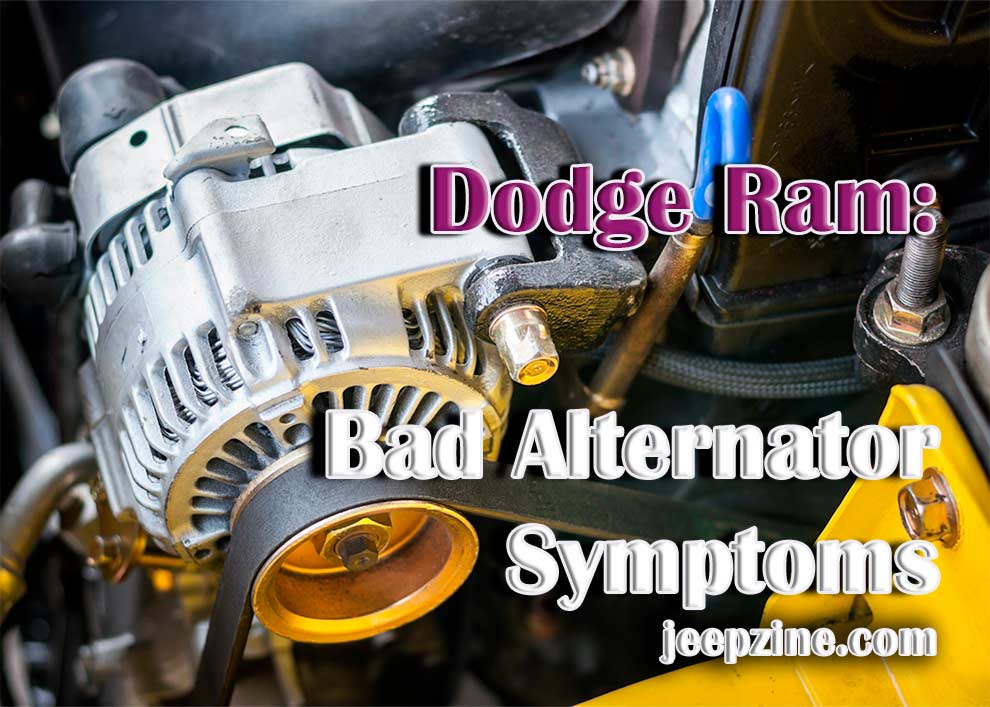 You might think that it’s the battery powering up your RAM, but it’s actually the alternator. It’s a relatively small unit that converts raw mechanical energy generated by the engine into electrical energy, which, in turn, brings all the accessories to life. I’m talking about the stereo system, headlights, and wipers, to name a few. So, what happens when the alternator fails?

The short answer – nothing good! You won’t be able to use the infotainment system (navigation, music, climate control) or even start the vehicle. But wait – how do you know that it is, indeed, the alternator acting up? By looking at the symptoms, of course! I made a shortlist of the most common signs and side effects of a bad alternator. Check it out!

#1: The Battery Light Comes Up

This warning light pops up on the dashboard whenever the battery is low on charge. More specifically, it indicates that it’s not getting enough voltage for a proper charge. In other cases, it can be the battery’s fault (it fails at holding the charge generated by the alternator). If you’re driving a new truck (2015+), you’ll see the “alt” light appear on the dash.

It’s a more specific sign that warns about issues with the charging system, not the battery. If you’re lucky, shutting the engine down and recharging it can solve the problem. Checking on the cables will also be a good idea. In the worst-case scenario, the only solution will be to buy a new alternator.

#2: The Lights are too Dim/Bright

Pay extra attention to the headlights: if they’re extremely dim when you turn the ignition key, that’s a clear sign of a malfunctioning alternator (it can’t provide a strong enough charge). Remember: the battery always holds a fair amount of voltage. So, over time, the lights should slowly fade away and turn off completely as soon as the charge is drained.

Now, this will probably sound strange, but sometimes, a faulty alternator actually makes the lights overly bright. That happens when it sends the wrong voltage levels to different electronic components in the RAM truck. Flickering and chaotic changes from super-dim to incredibly bright headlights are one of the most obvious side effects of a failing alternator unit.

Power windows, wipes, heated seats, and, of course, the radio units require electricity to work and rely heavily on the alternator to “feed” them. When it goes bad, a vast majority of electronic components stop working. Much like the lights, the radio will have inconsistent behavior (it’s working fine for a second, and then shuts down completely, going back and forth).

#4: Trouble with Starting the Engine

No engine will fire up unless it’s got a strong charge from the battery. A malfunctioning alternator drains the battery in a matter of minutes; as a result, you get stalling, misfires, and more engine trouble. As far as the most frustrating bad alternator symptoms go, this one’s arguably #1 on the list, as it leaves the driver stranded in the middle of nowhere.

But if you figure out that the issue is, indeed, with the alternator fairly quickly, you might just save the situation. Turn off every single system in the truck that’s not absolutely necessary for starting the engine. The lights, seats, navigation, air conditioning, and climate control – everything. Next, turn the ignition key. Chances are, there’s still some voltage left in the battery unit to keep the vehicle on the road.

Once you hear a squealing, whining noise, almost like someone’s cutting metal, you should stop the RAM and inspect the alternator. The noise might be caused by other parts of the powertrain, too. The serpentine belt, water pump, steering pump, or even the transmission fluid could all be the root of the problem. Lucky for us, there is a tried-and-true and simple way to get this right.

As long as the noise is accompanied by one of the other symptoms that we just discussed, the issue is going to be the alternator.