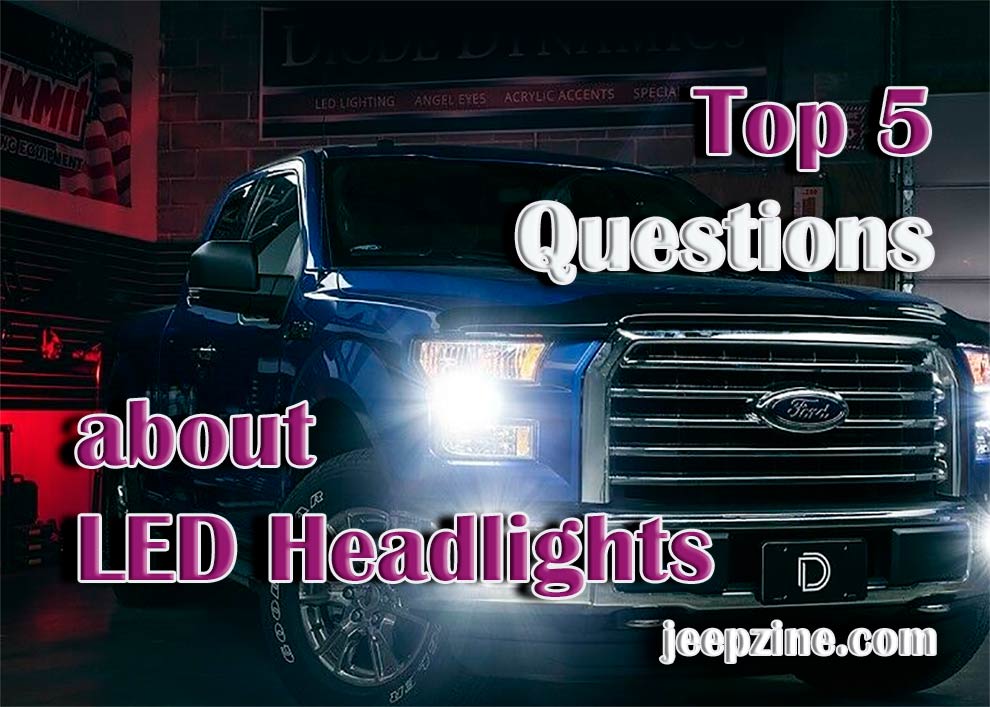 LED headlights – what’s their biggest appeal? Why are they slowly, but steadily becoming the most popular choice for Jeeps and other off-roading vehicles? Well, it’s pretty obvious: Light Emitting Diodes are brighter, have a longer lifespan, and look cooler than anything else on the market. That’s why most drivers prefer them over the HIDs and halogens. So, in this post, I’ll be your guide into the world of LEDs and answer the most popular questions.

Do they need protection against flickering; will you need a kit to replace the factory setup with LEDs; which lights are the brightest? What to look for when choosing between several light sets? These are just some of the topics that we’ll discuss today. So, buckle up, and let’s get right to it! We’ve got a lot of ground to cover.

#1: Which LEDs are the Brightest?

This is arguably the most frequently-asked question online. And it’s perfectly understandable, as drivers want to get the best LEDs for their vehicles. So, how do you measure it, exactly? How do you know which LED headlights are the brightest? The answer is simple: lumens. They are used to measure the amount of light generated by any light source. I bet you’ve already seen “lumens” or, more commonly, “LM” in the specifications.

Now, to put things into perspective for you, 1000 lumens won’t cut it for headlights. If it’s a flashlight, then yes, that will be more than enough to light up to 200 meters give or take. For a set of Jeep lights, the 2-4K lumens range is the sweet spot. If you’re a big fan of driving during the night and want the road to be really bright, go with 6-8K lumens. The market also offers 10-, 12-K LM, and even brighter headlights.

But, they usually cost a lot and are mostly designed for big, bulky, industrial vehicles. I’m talking about cranes, super-duty trucks – stuff like that. And one more thing: some brands specify the brightness for ONE of the headlights, while others indicate the joint output. Keep this in mind and always check the actual brightness before committing.

#2: Can the Stock Lights be replaced with LEDs?

Here’s another very popular question: Can you replace regular headlights with LED lights? And can that be done manually, or will you have to pay an auto shop/mechanic for the labor? The answer is yes to both questions. As we already learned, the vast majority of vehicles on American roads are equipped with the so-called halogen lights. They are pretty decent, but not on par with LEDs in terms of brightness, coverage, lifespan, and more.

And this leads us to the third most common question: is it safe to replace halogen with LED? Won’t that damage your vehicle’s computer system, circuits, or the battery? And the answer is no, you won’t have to worry about any of that. Of course, it’s very important to follow all the safety precautions. And, if you’re a bit worried that you won’t be able to pull this one off, it would be best to let a mechanic (preferably, with knowledge of electrical circuits) do that instead.

Good news: most modern-day LEDs are relatively easy to make sense of, especially for someone who knows their way around aftermarket gear. However, no matter your level of expertise, you won’t be able to make the LEDs work properly without a decent conversion kit. Join me, and let’s learn all about that next.

#3: Do I need a Conversion Kit for LED lights?

Right now, a kit is the only way that a vehicle with halogen lights can “accommodate” LEDs. Essentially, a kit is a combination of LED headlight bulbs and a set of drivers. The bulbs generate the light (obviously), while the drivers control the current that’s flowing from the car into the LEDs. By nature, all bulbs are rather fragile, and unless they get the exact right amount of current, they won’t work properly and may even break down.

Lucky for us, modern-day LED bulbs are absolutely identical to halogens in terms of size, shape, and overall design. That means they’ll fit and lock in easily. There won’t be any problems with the wire harness or the housing. That makes the replacement/installation process very straightforward.

So, do you need a kit for LED headlights? Yes, you absolutely do! And do remember that you’ll have to find the right conversion kit for your car. No, they’re not universally compatible, and you may end up ordering a kit that’ll be pretty much useless because of compatibility issues. So, again, it’s important to make sure the kit is 100% compatible with your vehicle’s make, model, year, wheelbase, and even the engine.

A quick note: LED bulbs can never work with HIDs or the other way around. Both light types are only compatible with the factory halogen bulbs and assemblies – that’s how it works. My advice to you: don’t buy cheap, low-quality conversion kits, because they do a poor job of controlling the wattage and may end up damaging your car’s assemblies, forcing you to pay big bucks to fix it all.

When I say “cheap”, I mean a conversion kit that costs less than 100 US dollars. Go a bit higher – 120-150 bucks – and you’ll see a huge improvement. The most advanced and reliable kits, in turn, are available for $200-300. They are very bright, have an impressive lifespan, and are usually backed up by various warranties.

#4: Anti-Flicker Protection for LEDs: is it really necessary?

If you’ve been asking yourself – do I need anti-flicker for LED headlights? – the answer is yes, you most certainly do. This is especially true if you’re the owner of a relatively older car with built-in halogens. The thing is – the circuitry for “halos” is very different. Plus, unless you’re driving a brand-new vehicle, it won’t have an advanced onboard computer to “fine-tune” the electrical current to fit the LEDs perfectly.

True, you can just go ahead and put the LEDs in instead of the factory lights, but flickering will be a part of the deal. And, it can be quite annoying. Plus, while in most cases, it’s pretty harmful, sometimes, flickering can be a sign of a much bigger and more troublesome problem. That’s why I recommend dealing with it ASAP so that you won’t have to constantly worry about it being something serious.

The best way to do that is to buy an anti-flicker adapter. These usually don’t cost a lot and are available in most offline and online stores across the States. The installation process will be simple and straightforward: no need to hire a mechanic. Now, we just talked about conversion kits, and if it’s an expensive unit, it will be able to eliminate flickering on its own. However, not all conversion kits are capable of doing that and you should always come prepared.

#5: LED Headlights: why are they so Popular?

I briefly answered this question in the intro, but let me elaborate a bit on that:

Some less impressive lights have a shorter life expectancy, of course (somewhere in the 10-20K range), but they’ll still be more durable and long-lasting than your stock system.

HID lights are pretty good in this regard, but they’re still not a match for LEDs. You can check out a couple of YouTube videos to see how big the difference actually is.

So, there you have it – the biggest pros of moving from the stock headlights to LEDs! If you’ve got some more questions, don’t be shy and reach out to me in the comments section!