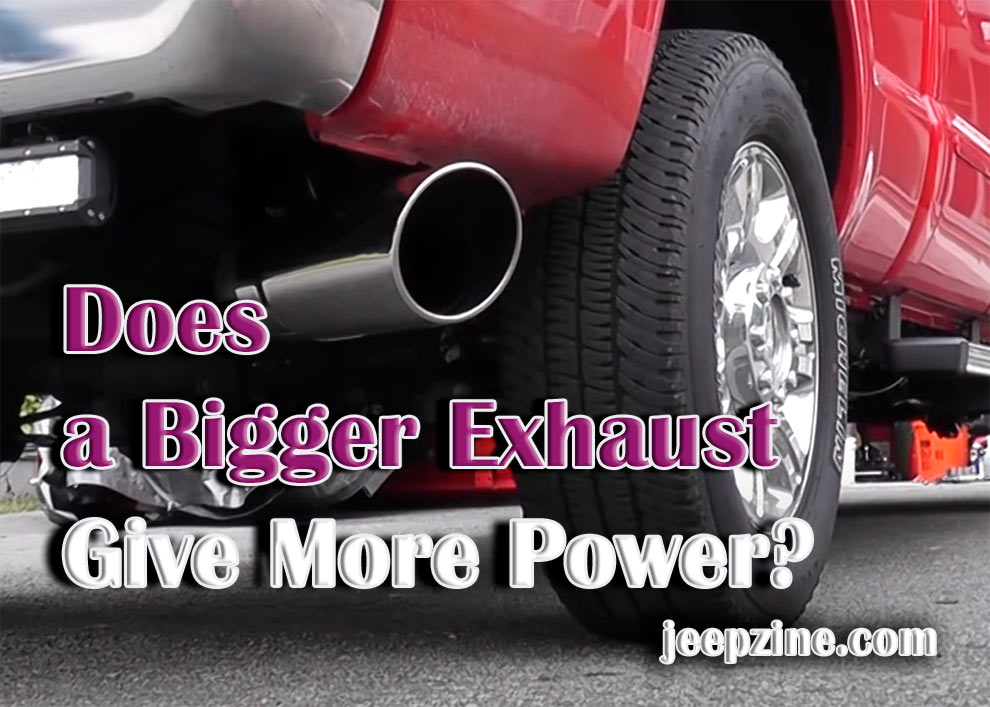 When it comes to aftermarket upgrades, bigger isn’t always better. For example, larger-than-life tires can greatly reduce ride quality. Really big fenders, bumpers, and sidebars, in turn, will probably not fit the factory mounting holes, and so on. Today, our focus will be on the exhaust system. Say, you’re planning of replacing the Exhaust System for Powerstroke, Hemi, or Cummins engine.

Should you go with big pipes, or maybe pick a smaller diameter? What advantages will a big exhaust introduce? Will you get more HP/torque, better acceleration, and improved fuel efficiency? That’s exactly what we’re here to figure out! I’ve had my fair share of third-party exhausts and can tell you everything there is to know about pipe diameter and why it matters. So, listen closely!

Let me say right from the start that a 2-5% boost is what you should expect from a new exhaust. No matter how expensive the aftermarket pipes might be, they won’t be able to give you a 10-15% increase – that just won’t happen. Now, the actual boost mostly depends on the engine. Smaller, less powerful engines get a more significant improvement (3 to 5 percent). I’m talking about a 4-cylinder motor.

A bigger beast, like a V6 or a V8, will gain 2-3% max. Another thing to keep in mind: we measure a vehicle’s strength/power by multiplying torque by RPM and then dividing that number by 5252. Say, 310 lb.-ft. of torque x 5000 RPM equals 295 HP. However, since most cars slash motors almost never reach 5K RPMs, the actual increase in power will be even less significant. You can, of course, invest in a tuner and an air intake to maximize the boost, though.

The Benefits of a Big Exhaust

Will you get instant pros when switching from a limited factory exhaust to an aftermarket system? Will the enhancements be noticeable? The answer is yes, you most definitely will see positive changes. So, go ahead and take a closer look at what a new exhaust can bring to the table.

Most importantly, larger exhaust allows for better flow of the toxic fumes. That’s why compared to the restrictive stock pipes, aftermarket systems are almost always bigger in diameter. So, as a result, you do get better performance, because the vapors aren’t forcing the engine to overheat or work harder. This is actually the most significant benefit of switching to a big exhaust: to avoid engine failure/breakdown due to overheating.

Here’s how this works: during combustion, the cylinders produce exhaust gases/vapors. And, they take up physical space inside of the chamber. And bigger pipes do a better job of “sucking” them out and freeing up space for pure air. The more air inside the chamber, the stronger the explosion will be, resulting in more HP and torque.

Larger pipes also means the motor will be much louder. Mostly, this depends on how big or small the muffler is, of course, but the rest of the exhaust system matters as well. Stock exhausts are narrower to make the car less noisy, which is what regular drivers tend to like. However, if you’re a racer or an off-roader, the aggressive growls shouldn’t bother you.

A quick note: Without a muffler, the sound of the tiny explosions in the combustion chamber will be ten times louder. That’s why it’s very important to make sure you’ve got a muffler with the aftermarket exhaust. Some experts claim that sound dampening mechanisms negatively affect performance, but this hasn’t been proven yet.

The Bigger, the Better?

So, at the end of the day, does the universal rule – the bigger, the better – apply to exhaust systems, or not? Should you always buy the largest pipes for your vehicle? The answer is no. In fact, if you overdo this and install disproportionately big exhaust pipes, that will create more problems than introduce positive changes. The overall performance will be decreased, and the car will run slower.

That’s because overly wide pipes won’t put the necessary pressure on the vapors/fumes that forces them to escape through the tailpipe. Yes, it’s always important to find the golden middle. For most modern-day four-wheeled horses, 2.5 inches is a great place to start. I’m talking about the exhaust pipe diameter. Or, you can measure it against the HP.

Say, you’ve got 300 horses under the hood. Divide that by 100, and you’ll get the right diameter: 3.5 inches. As for the noise, I recommend checking out how a certain exhaust system sounds online. Just type its name on YouTube and listen closely. While that won’t provide you with a 100% accurate representation, it will still give some food for thought.