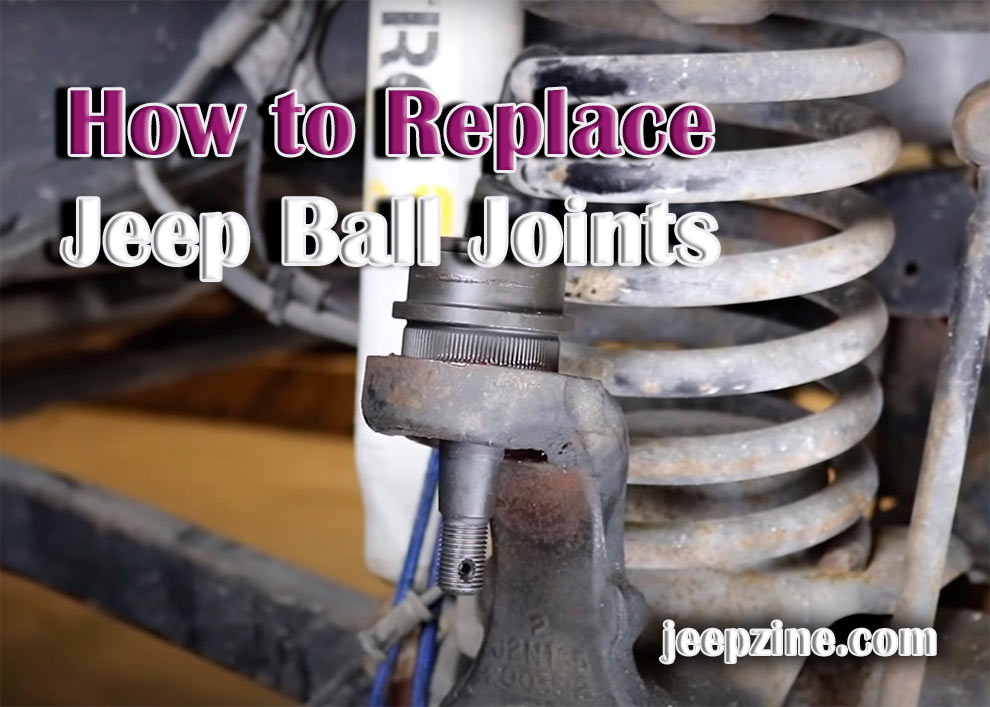 These detailed instructions for replacing Ball Joints on the Jeep. Let’s get started without further ado!

To get to the ball joints we need to remove the wheel and tire assembly. Before we do this we don’t want to crack the wheel nuts then we can jack up the vehicle. Now we have the wheel and tire assembly removed, we have access to, what we’re working on the next step is to remove the calipers, and before we do that we’re going to pop the hood open and loosen the top of the brake fluid reservoir using a 12 point 1/2 inch socket wrench, go ahead and remove the Caliper Bolts After removing the calipers, hang them out of the way with a piece of wire to attach them to the lower front wishbones. Now with the caliper out of the way, you can remove the brake lever. Set it aside so we can access the hub and splash guard assembly.

Now we remove the three screws that secure the hub to the steering knuckle. Since these screws are hit at over 100 feet [pounds], a crowbar may sometimes need to be used to loosen them. With the three hub bolts removed we can now remove the nut that secures the axle shaft to the hub assembly. To do this, first the old split pin and then the locking washer and cap must be removed. Remove the split pin. Use a large screwdriver. You can twist the ends to one side and then you can straighten them a bit with pliers. You can usually count it through from there with a hammer, just put the tip of your needle-nose pliers [on] the end and tap the side of the pliers. Pull it all the way out then remove the cap and spring washer.

So we’re going to use a 36-millimeter socket wrench to remove the axle to the hub nuts and a good long draper rod. If you don’t have a crowbar on hand, a great tip is to use the end of your jack handle. After you remove the axle nut, there is another washer underneath that is wobbling. Set the washer aside, grip the hub assembly. It’s pretty hard. Place your thumb on the end of the axle shafts, squeeze with your thumb and pull off the hub along with the splashback assembly for the brake disc. Put these aside. We have access to pull the axle shaft out of the differential. Grasp the axle shaft and pull it straight out.

Next, we’re going to remove the tie rod end attached to the front knuckle to do this. We need to remove the castellated nut and of course the cotter pin that is holding the castellated nut in place so it doesn’t loosen. That’s three-quarters of an inch. So loosen up, just a little, and we’re done. We’ll attract up to 55 foot-pounds. Don’t take it all away. We are going to use a high-level removal tool. Pass the forked portion of the jaws under the string knuckles and the single portion goes over the top of the saddle. And we will tighten it. You really don’t have to be careful not to tear the sleeve on the tie rod end. Tighten that the lower jaws are held in place by the knuckle itself while the upper jaw clamps down and the screw that attaches to the tie rod end ball forces it through the knuckle I have to get it pretty tight and usually come a quick punch or two straight from the hammer. Sometimes it shows up, you’re not ready for it It’s just safety glasses on. Hand it in, it goes, and you can proceed to remove the castellated nut from the top. You can move your tie. Rod forward and out of the way. Now that everything is removed we have full access to the steering knuckle and both the lower ball joint and the upper ball joint.

So what your ball joints actually do is allow the steering knuckle. To turn it, you can turn the steering wheel yourself using the steering linkage on the C-channel of the axle assembly. So I wanted to use a 28-millimeter jack. Remove the castellated nut from the lower ball joint. For the upper castellated, we will use a 22-millimeter six-point socket, actually, this is a 12-point socket. So now to squeeze out the ball joints we have to remove the steering knuckle ourselves to do that. We’re going to reinstall one of the lock idiot nuts. Just a little just enough to catch it. So it’s not going well and we’re going to use a three-pound sled to count on the shoulder on the top of it, now lock it out. We are now unscrewing the nut, which is encapsulated in the binding. That’s right now. It is difficult.

Let’s clean up the area when we install the new ball joints. That way they go in clean and aren’t attracted to grinding with them here. It could slowly evaluate over the years. Plus it’s clean, it’s a lot easier to go straight ahead. It’s really important. I have now taken the new ball joint and carefully placed it under the lower C to install it, so I chose a cap that would fit perfectly parallel to the bottom of the axle seat. In addition, since the seabed is actually tapered, the seabed is wired towards the centerline of the vehicle rather than the outside. For the receiver, I used a piece that is also tapered to fit that way. We’re pushing a perfectly straight line. This is very important otherwise, you will install the ball joint at an angle and it will probably not look all the way. Keep an eye on it to make sure it installs perfectly straight. You really want to make sure that the ball drum shoulder is fully seated.

So we’re going to use a crowbar for one final lap. Sitting fully all around is good. Now we install the top ball joint by pushing it into the top of the axle. So I have to select our receiver and press bushings and again since the axle seat is tapered and I have to use a tapered receiver as well. I turned the thickest part of the receiver sleeve inwards. There’s a sleeve I can push right down, let’s clip all of that in place. Make sure everything is centered just right. You may need to hammer a bit, it’s like everything is straight so let’s go ahead and push that in.

To make sure there isn’t a gap down there, keep tightening it. See, there is a little gap. There has to be a curve down the last few meters. When the upper and lower ball joints are installed, it is time to mount the steering knuckle so that it is pressed on from below. We will be using new hardware that should come with your ball joints. Here’s for the top joint, and then one for the lower joint, the lower one tied with 80 foot-pounds of torque, the top tightened with 75 foot-pounds of torque.

If there is not enough space to insert the split pin after reinstalling the new castellated nuts on the ball joint pins. Then it is permissible to tighten them further until the holes coincide. Now we’ve reinstalled our steering knuckle. We can put the axle shaft back in place. To do that, we first make sure it is wiped clean. Let’s use a clean paper towel for this. Let’s just swipe. In the direction of one of the wedges, make sure that there is no debris on the end. There’s a little trick to grabbing a larger screwdriver and partially supporting the axle shaft so the end doesn’t hit the dirty inside of the axle tube. Would you like to keep this clean so we don’t mess up our differentials?

Then carefully insert it. Don’t force it. Otherwise, you can ruin your interaxle seals. Next, we will reinstall our splash guard. When you look at this splash guard, there is a little notch that faces forward. If it’s a cake platter, the bottom goes towards you. This is the clearance that the tire body involves [joint] We saw our hub over it And then carefully made the hub splines on the axle shaft assembly. Don’t force it. You will feel it click into place right there and then slowly align the holes on the hub with the holes on the brake shield.

There are three screws that we need to install. One on top and one also in front and behind. Correction: Both the D30 and D44 hub bolts are tightened to a torque of 75 ft-lbs. Next, we install the washer and then the axle nut. This one goes up to just under 175-foot pounds. Then our spring washer and then our retaining cap. Use a fresh powder pen to do this. Now we assemble the tie we brought for the driver’s side. This one goes at 55-foot pounds. Don’t forget to install a new cotter pin. Let’s put some fat in our new upper ball joint. This is NLGI number 2 waterproof grease. Put the brake disc back on. Be careful not to touch the braking surface so that none of the oils from your hands contaminate your [mixture]. And there we go, and then we now do the caliper and then our caliper mounting bolts. Time to put the wheel and tire back on and tighten all the wheel nuts.

Congratulations, you are done. You have successfully changed the ball joints on your Jeep.