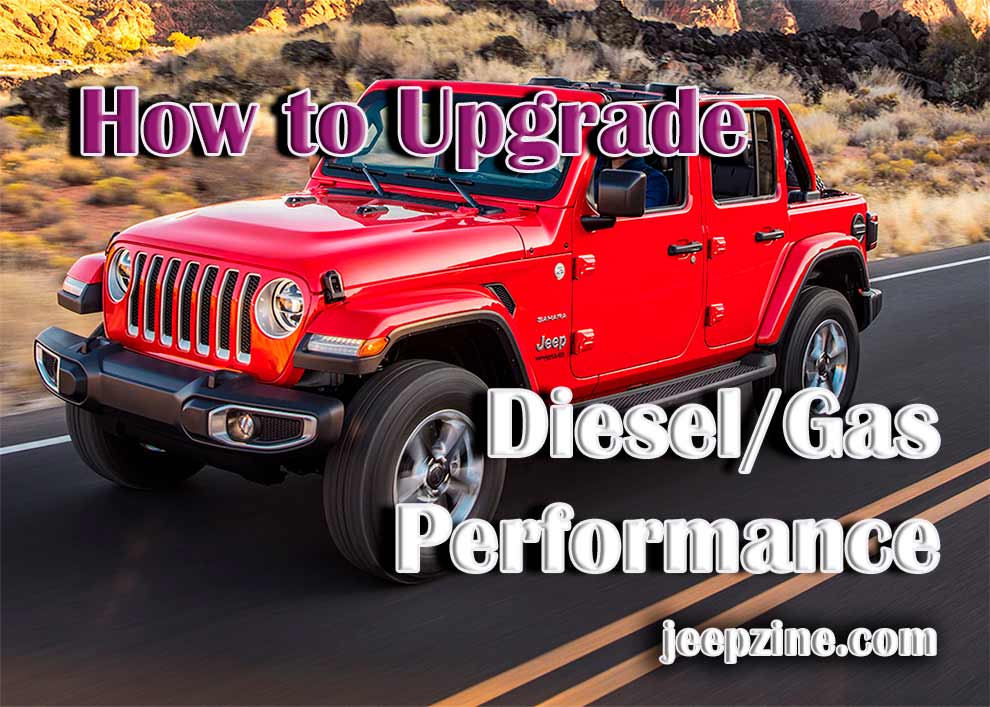 Jeep trucks are one of the most powerful and reliable vehicles on the planet. Still, we always want to get extra HP, torque, mileage, and acceleration on the road. That’s especially true for the fans of off-roading looking to get that edge. If that’s exactly how you’re feeling, then you came to the right place! In this post, we’ll talk about the best upgrades for diesel- or gas-powered engines.

The focus will be on the most efficient gear/accessories for the legendary Jeep. It won’t take a mechanical degree to install/use one of the following products: you won’t have to spend days trying to set everything up. Plus, the positive changes in performance will be obvious. So, join me, and let’s talk about tuners, air intake kits, exhaust systems, and more.

Optimize your Jeep with a Tuner

First up, we’ve got Tuners and Programmers for Jeep. These electronic devices are available for a (relatively) affordable price and do an excellent job of maximizing any engine’s performance. I gotta say, however, that a tuner that works on a diesel motor might not fit a gas-powered unit. So, what’s the deal here? It’s simple, really: all you’ll have to do is connect a tuner to your Jeep’s computer system and let it run.

Before I get to any calibration/adjustments, I launch diagnostics. The programmer will “tell” you about hidden flaws in the vehicle that need to be fixed. This way, you’ll avoid costly repairs in the future. Once the tests are done, it will be time to move on to the actual tuning. The most advanced devices allow downloading tunes (they’re not free, by the way) and “fine-tuning” the powertrain to driving off the road, on city streets, or getting max acceleration.

Tuners can improve fuel efficiency, but don’t expect anything more than 2-4 MPG (which is pretty decent in the long run). The boost in HP/torque will be more impressive (up to 10%, depending on the Jeep model, the engine, the rest of the powertrain, and the suspension). The throttle response will also be improved, resulting in better acceleration.

Maximize the Airflow with an Intake System

To get even more miles per gallon out of your Jeep, consider investing in an aftermarket cold air intake kit. With it, you’ll get a filter that keeps debris and other contaminants at bay, thus protecting the motor. An air intake tube will also be a part of the deal. The tube is capable of upping the air filtration in the engine bay. A premium-quality Cold Air Intake System boasts up to 50% more airflow.

Air intake systems are very easy to maintain. You’ll only have to replace the filter every 30-50K miles, or even 100K miles. Some intakes allow replacing the filter (which will cost you less than buying brand-new gear). The improvements in horsepower and torque are similar to what we usually get with a tuner (or maybe even slightly more). The acceleration boost might not be as strong. You will, however, enjoy the new race-car-like sounds with an aftermarket kit!

Get Rid of Fumes with an Exhaust System

In contrast to the previous two products, a Good Exhaust System won’t introduce any big powertrain improvements. You’ll still get extra HP, torque, and an extra MPG or two. Now, an exhaust’s biggest selling point is how effective it is at eliminating fumes. Over time, the factory system gets old, rusty, and clogged, which affects the engine’s lifespan and how it performs in stressful situations (like off-roading).

Besides, the factory exhaust on pretty much any Jeep truck is average at best. When in the market for a new one, you’ll need to decide between cat-back and axle-back systems. Axle-back is rather cheap but not very impressive in terms of an HP boost (it’s still strong against fumes). The cat-back design, in turn, is all about performance, but it’s expensive and harder to install.

Also, make sure the material and build quality are decent. Say 304 steel is all about superb durability, but it’s a bit pricy. The 409 steel is less expensive, but not as long-lasting. Last, but not least, the exhaust should be coated with a premium-quality finish (protection against rust).

Most drivers only know about the benefits of a new exhaust system, but what about the headers? They focus on pushing out gases out of the cylinders (that are located inside of the engine, of course). And, since each cylinder is granted its own pipe that filters out the fumes, that greatly improves the engine’s output. Here’s the deal: with the stock system, you only have a piston, and it’s usually having a hard time staying efficient.

As a result, you lose HP and torque because the cylinders can’t provide their top performance. Exhaust headers don’t cost a lot but are one of those “hidden gems” that will help the engine last longer. Plus, they make your Jeep safer and more reliable, not to mention the boost in “horses”.

And that’s all I wanted to share with you today, dear friends! As you can see, there are more than enough ways to improve Jeep’s performance. All the gear that we discussed in this post is widely available throughout the US and won’t be a problem to order. Plus, while a novice might struggle a bit with the installation, if you’re handy with some basic tools, it won’t be hard to handle it.

An air intake kit will improve the airflow and protect the engine from overheating. An exhaust system can eliminate the fumes and make the vehicle sound like a beast. A decent tuner, in turn, improves performance and helps find the right settings for different driving styles and scenarios. And let’s not forget about how efficient exhaust headers can be. Go ahead and take your pick!