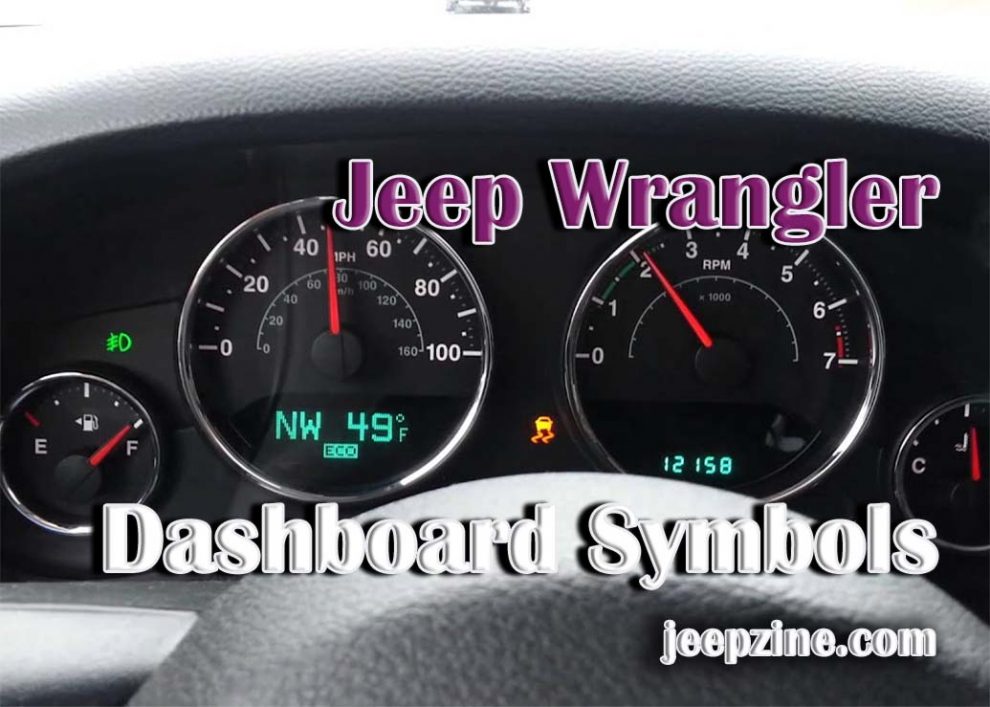 There are literally dozens of symbols on the dash, and most drivers don’t know what half of them mean. When you hear a short beep and see a light or a symbol appear on the dash, it can be pretty confusing. Should you just ignore it, or do your best to solve the issue? True, many symbols are self-explanatory and shouldn’t be hard to understand.

However, even if you think you know what a certain warning light means, you might still be wrong about it. Safety must always be the #1 priority. So, whenever you see an unfamiliar symbol, it would be best to stop the Jeep and solve the problem. As for this guide, it will help you figure out the most common Jeep Wrangler Dashboard Symbols!

Let’s start with one of the most common and annoying symbols. The Check Engine light (a yellow engine icon), AKA the CEL, pops up for a long list of reasons. It can indicate trouble with the ignition coils, spark plugs, cold air intake, exhaust manifold, and many other things. It should never be taken lightly, though, because you might be dealing with overheating, low oil pressure, or something worse.

Statistically, the CEL mostly activates when you’ve got a cracked gas cap. So, when you see it on the dash, make sure to stop the Wrangler and investigate the cap first. And when the Check Engine light is flashing, that means you’re in real trouble. Call a mechanic immediately!

The symbol of a battery (a “box” with “minus” and “plus” icons) tells the driver about issues with the charging system. Those include loose/cracked wires, a depleted battery unit, or even a faulty alternator or starter. Keep your eyes on the headlights: if they’re dimming, that’s a clear sign that the problem is, indeed, with the battery.

I bet you’ve seen the old-school oil can pic on the dashboard already. And, yes, it does signal that the oil pressure isn’t right. Most likely, the issue is with the oil pump, and it’s not doing a very good job of keeping the engine parts lubricated. Driving with low oil pressure can cause the engine to break down. The sooner you notice this symbol and stop the Wrangler, the better.

When the tank is getting dangerously close to depletion, you’ll see the low fuel warning light on the dashboard. And if it’s not going away, that means you’re almost out and it’s time to find a gas station ASAP.

The thermometer symbol means that the coolant/antifreeze isn’t “chill” enough and it’s failing at cooling down the motor. Chances are, you’ve got a leak in the coolant system, or the mixture is messed up. Sometimes, this can be caused by a bad engine thermostat. Again, like low oil pressure, faulty coolant temp can result in overheating.

The TPMS image appears on the dashboard whenever the pressure in one of the tires is off. This can happen with multiple tires simultaneously, by the way. The golden middle for modern-day vehicles is 30-35 PSI, and driving with low-/high-pressure tires will have a negative effect on performance, balance, and stability. You can use a compressor to set the right PSI.

Mostly, this one comes up when the driver doesn’t have his seat belt on. Some advanced systems also activate when one of the passengers is riding unprotected. Remember: the light will stay on until all the seatbelts are hooked.

This one’s pretty self-explanatory: it pops up when you think you’ve closed the doors, but you haven’t. It’s actually pretty dangerous to drive around with the doors open, especially on a busy day.

The symbol of a car with wheel tracks indicates that the traction control system is on. Traction control is a very useful system when you’re driving on rain, snow, ice, and the wheels are slipping. By applying the brakes at the right moment, it helps the Wrangler regain traction.