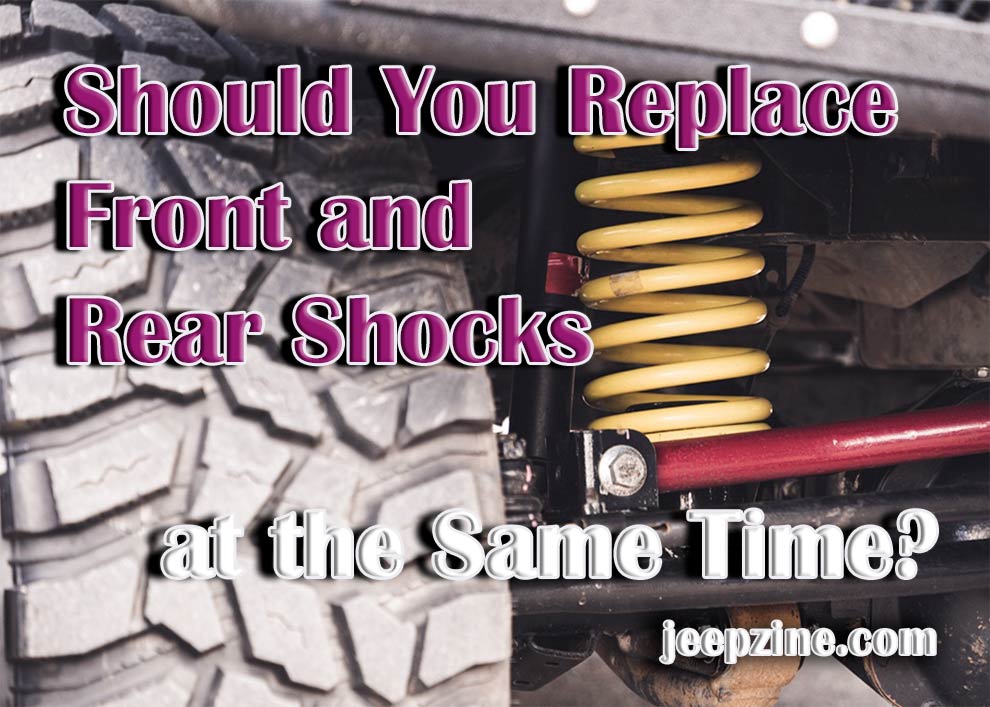 Depending on your driving style, the roads, climate, and the actual vehicle, the shocks might not wear out evenly. That’s right: it’s not uncommon for, say, the front shocks to fail quicker than the rear ones. Alternatively, even if you’ve got the Best shocks for 1 ton dually, they’ll still go bad a lot sooner than the average lifespan (5-7 years) if you do a lot of towing.

So, what should you do? You thoroughly inspected all four absorbers and only saw signs of wear on the front left one. Will it be wise to just replace this single shock, or not? That’s exactly what we’re here to figure out! But first, we’ll talk about the differences between front shocks, rear shocks, and struts, to help you see the bigger picture.

Front and Rear Shocks: are they Different?

This is one of the most popular questions online, and the answer is yes, they are very much different. Essentially, they do the same thing: smooth out the bumps on the road and ensure a controlled, even ride quality. However, they are not the same. The front shocks are a bit smaller and slightly thinner. Plus, they have a shorter lifespan. The reason: since the engine is located in the front, the front shocks have a lot more vibration to “tame”.

On the other hand, if you’re an industrial worker and haul weighs regularly, the pressure on the rear shocks will be higher. Now, rear shocks are more expensive than the shocks upfront and mechanics charge a bit more to replace them. But, they’re considered to be an integral part of the suspension system because they affect steering and alignment. Oh, and remember: shocks and struts are NOT the same and they are not interchangeable.

You’ve got one worn-out Shock: What Should you do?

As I mentioned earlier, rear shocks usually last longer. Plus, it’s not rare for one single shock to malfunction. This is especially true if you do a lot of off-roading. Potholes, bumps, rocks, steep climbs, and bushes – these are just some of the things that can make an absorber go bad. But, all the other shocks may not be affected by this at all. So, what’s the best course of action in this situation?

Here are the facts: if you have a faulty front left or right shock, it is highly recommended to replace BOTH front shocks, even if you’re on a really tight budget. Some experts claim that getting the exact same shock (the same brand, series, and model year) will help you avoid extra expenses, but that’s not true. To achieve a balanced, smooth ride, make sure to replace both shocks simultaneously. Otherwise, you’ll get a bumpy ride even on flat terrain.

This is equally true for the front and the rear pairs of shock absorbers. I bet you’ve noticed that auto shops and online retailers almost always sell shocks in pairs – two for the front, or two for the rear. You’ll have a hard time finding Aftermarket shocks for F150, Ford Ranger, Jeep Wrangler, or any other vehicle that don’t come in a pair. Well, there’s a very good reason for that!

Is there a Point of Replacing all Shocks at Once?

So, we just figured out why it would be wise to replace two shocks at once instead of that one faulty shock. But wait – shouldn’t you change ALL FOUR absorbers? Well, it depends. If you only use your car to drive yourself to work, to take the kids to school, and to buy some groceries, this will be an unnecessary investment. Highways and in-city streets won’t be a challenge for the suspension system as long as all shocks are working properly.

In contrast, the fans of off-roading, racing, and competitive driving might want to start saving some bucks. That’s because once one of the shocks goes bad, and you only replace the front or the rear set, that will have a big negative effect on overall performance. The reason – the new shocks will handle all the bumps on the road easier, while the old pair will struggle with them, resulting in an average-at-best dampening effect.

Trust me: you don’t want to be in the wilderness behind the wheel of an SUV or a truck with unbalanced shocks. That’s exactly what you’ll get if you don’t replace every single shock – an unbalanced ride quality. So, summing up, if it’s just one shock going bad, replace the one next to it as well, be it the front shocks or the rear ones. However, there’s little point in replacing all four absorbers unless you do a lot of off-roading or you’ve got extra money in your pocket.