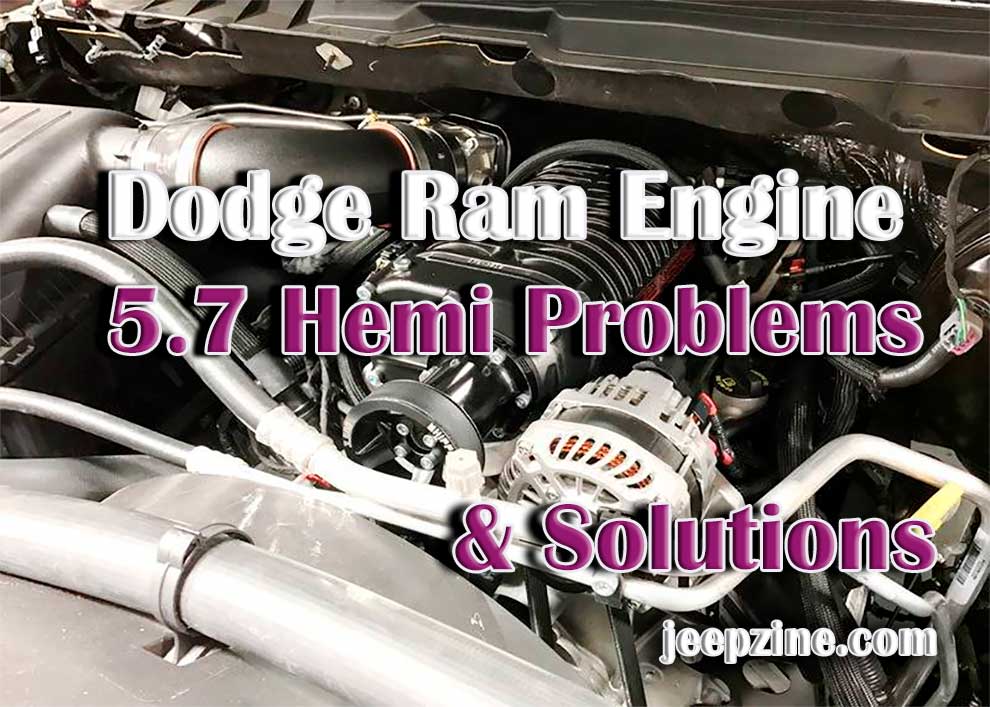 Chrysler’s engineers did a fantastic job with the 5.7-lit Hemi V8. It is strong, durable, easily handles the most demanding tasks, and puts out impressive HP + torque. It’s been around for almost two decades (debuted in 2003) and is internationally known as an excellent motor. It does, however, have its own issues, flaws, and pitfalls. That’s exactly what I want to talk to you about today.

That’s right: the focus will be on the most common problems with the 5.7-lit Hemi and the quickest, most effective solutions. Don’t worry – we won’t get into any expert-level stuff unless we absolutely have to. The goal of this guide is to help the average driver get his RAM 1500 (or any other Hemi-driven SUV/truck) back into action. Let’s see what we’re dealing with here!

Before we get to the main topic, I want you to take a quick look at the pros and cons of the Hemi engine. That will help you to better understand its structure:

This is a very common problem among off-road-friendly SUVs and trucks. When pushed to the limit, the factory air filtration system fails to keep the engine cool, which, eventually, may lead to overheating. With the Hemi engine, you only get two valves per cylinder, and that greatly reduces its filtration capacity. So, how can you solve this issue? Unfortunately, even the most experienced mechanics won’t be able to do any “magic tricks” to fix this.

The best course of action would be to get a brand-new Cold Air Intake For Dodge Ram 5.7 Hemi. These are largely available in every US state and won’t cost you a pretty penny. The installation process only takes 30-60 minutes with basic tools. A proper air intake tube can greatly improve the airflow (you’ll get a 50% boost or more). Plus, the best air filters keep contaminants (like dust, pollen, debris, and such) from damaging the engine.

The manifold bolts that connect to the rear cylinders tend to snap, which is a big problem. The reason: they’re “hidden” in the far end of the engine bay and are much harder to cool, especially with the factory filtration system. The exhaust manifold, also known as the header, has only one job: to remove emissions generated inside of the engine. And when the bolts snap, overheating can be right around the corner.

Fortunately, switching the bad bolts for new ones isn’t the hardest task out there. You will, however, need some tools and at least basic experience with car engines. If you don’t have that, then it would be best to let a pro handle this.

Again: emissions are a rather big issue when it comes to performance-oriented V8 engines. Now, I did mention earlier, in the pros, that the dual spark plug design allows the Hemi to be efficient against emissions. However, in a real-world scenario, that won’t cut it. In stressful situations, the limited factory piston will give up on you rather quickly. Not to mention the faulty manifold design. One thing you could do is use a cleaning agent and mix it with the fuel.

It should get rid of harmful deposits. Higher-quality fuel can also do the trick. Some experts recommend changing the oil – that’ll be of little help, though. My recommendation is to invest in a decent set of Headers for 5.7 Hemi Ram. I just mentioned the flaws of the piston design. Well, with headers you’ll have a dedicated pipe for each cylinder inside of the engine. As you can imagine, that will greatly improve efficiency and get rid of emissions much faster.

Sadly, many drivers don’t fully understand the importance of headers for V8 engines. They usually neglect them and think that an exhaust system is the answer to their prayers. Don’t get me wrong: an aftermarket exhaust will boost the HP/torque, make the vehicle sound like a beast, and help with eliminating the emissions. All I’m saying is that if you’re limited in cash and drive a Hemi-powered truck/SUV, headers will be a slightly better investment.

Low-quality fuel, bad valves, and faulty lifters are the main cause of this. Now, some experts believe that you shouldn’t even worry about it unless you’re constantly pushing the Hemi to the limit. But, since this is a rather expensive engine, it would be best to at least try and solve this. One of the most effective solutions is to use high-moly oil (synthetic). It is known to “smooth out” the valves and the lifters.

In most cases, you won’t even need to invest in brand-new oil. Just check the oil level inside of the engine. If it’s too low, try adding more. That should fix the ticking sound. As mentioned, cheap fuel can make the Hemi tick as well. This is especially true for ethanol-rich fuel, by the way. That’s because it’s not very effective at lubing the fuel injectors.

This is another pro that can sometimes be a con. The very idea behind the MDS is to boost fuel efficiency. Whenever you’re driving on even terrain at a steady speed, this system shuts down four cylinders, which, of course, saves some of that precious fuel. The bad news is – lots of drivers complain that the multi-displaced design is a bit faulty and far from being smooth.

Mostly, they claim there’s a loud noise the second the cylinders are powered off, and that can be quite frustrating at times. The effect intensifies when there’s a third-party header set, exhaust system, or air intake kit installed to boost the engine’s performance. Don’t worry, though, because it’s very easy to turn MDS off completely. No tuners, programmers, or any other extra devices/gear will be needed. Here’s a step-by-step guide: